Mahalo for visiting us. We are honored to share this time with you. On our site, you will find information on Pearl of Polynesia,  Testimonies, Lei, Leipo'o & Craft kits, CD's DVD's. You can also find a Kahu to perform Hawaiian Style Weddings and vow renewals. You can leave a makana (gift of a tip) and much more!   We are happy and grateful you are here. 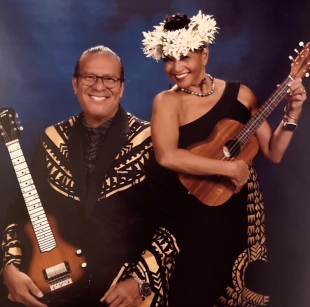 We are  Tui and Maile Letuli, Ambassadors of Aloha, founders of Pearl of Polynesia bringing you love and Aloha Spirit through music (mele), ukulele,  dance (hula)  and friendship (hoaloha).

Tui and Maile’s journey together started 34 years ago, in a beach town cafe where Tui played music and asked Maile to come and dance a hula while he played.  Little did they know that would lead them to a path of island music and projects around the world as Ambassadors of Aloha.

Tui is a true Ambassador of Polynesia.  He was raised in American Samoa and is of Native Hawaiian and Samoan descent. His upbringing led him to be the gifted Singer, Songwriter, Musician, Stuntman, and a man who passionately loves his Polynesian Islands. Tui comes from a long lineage of entertainers from both his Samoan and Hawaiian sides.  His father, the Father of the Fire Knife dance is Paramount Chief Olo Misilagi Letuli who in the 1946  added the fire to his knives that created what we know of today, as the Fire knife Dance or Siva Afi dance, this represents his Samoan heritage.  His Hawaiian heritage dates to the 40’s, where his grandfather is the legendary Al McIntire.  He and his brothers Lani and Dick, were one of the many artists who pioneered popularizing Hawaiian music in the 30’s & 40's.  A natural born entertainer, Tui has worked as an actor, stuntman and as a Local 399 Teamsters in the movie industry and he is no stranger behind or in front of the camera. He has contracted with Disney as a talent scout for their worldwide locations and has frequented the entertainment lineup at Trader Sams at Disneyland in Anaheim, CA.  He currently contracts with Princess Cruises as a Polynesian Ambassador, where he and his wife Maile share aloha, culture, and music of the islands with all passengers on cruise ships.  On the side,  he partners as a marketing director and consultant for many other worldwide organizations and is currently finishing his Dreambuilder book.
Maile also is Native Hawaiian mix with Portuguese, Chinese & Filipino. She was raised in California with her parents dedicated to raising her and her brothers influenced in the Hawaiian Culture. Her father Al "Sonny" Pelayo was very instrumental in pioneering the HICC Ho'olaulea at Alondra Park that has celebrated 50 plus years in existence.  Leimaking was natural to her as she grew up in the back of their family flower shop "Maile's Flower Shop" and she, her mom and Aunty Alice Richmond made a variety of lei that served the community in the 70's/80's.  She spent summers in Hawai’i and has a diverse Hula genealogy that started at age 4, under the direction of Miss Maile Mau from the Island of Oahu.  In her teenage years, she toured and danced with Moana Chang and the Kalani Islanders, leaders in Southern California for dancing and singing Polynesian songs in the 1970’s and 80’s.  Her adult hula genealogy brought her to study under Kumu Hula Mohala Reese who studied Aunty Maiki Aiu Lake and Aunty Mae Klein.Maile also comes from a family of entertainers and is cousins to Actor Branscombe Richmond, Na Hoku Winners Sean Na'auao & 2015 Merrie Monarch winners Kumu Kailihiwa and Ipolani
Both Tui and Maile passionately love their Polynesian Islands and are committed to preserving the cultural arts. Their return to American Samoa in 2017 prompted the start of Pearl of Polynesia.  Prior to their return,   together they have given their talents back to the Southern California community and founded Pacific Talent Academy of the Arts in Southern California, the host of Weekend in Polynesia , the largest fire knife dance competition in North America and ITO (International Tahitian Ori) competition helping the youth of Polynesia connect to their rich heritage

Their efforts have supported their son's success of touring the world with Hawaii's 2018 Grammy nominated Josh Tatofi.  Which has helped Laupepa launch his 1st single “Kanikapila”.

They both love travelling worldwide, entertaining, public speaking, and spending time at their homes with their family in American Samoa, Maui, and California.  They are true Ambassadors of Aloha that love to fulfill their passion of touching people’s lives with the Spirit of Aloha.

Ahuwale ka po’okela i kau hana ia ha’i
“It is through the way you serve others that your greatness will be felt.”